Garden State Ski Club started in the spring of 1958 by about 20 people. It was formalized and incorporated into a non-profit social organization in October 1958.

The first meeting was held upstairs of the Westwood Ford Dealer in Westwood. Their first president was either Don Challoner or Chester Kreutzberg. There after the club moved to the Old Mill Stream Bar in Paramus. Membership ranged from 16 years of age to young adults and grew to a great number of 40 members. Wally Reed joined with his wife in 1966, one of our oldest members chronologically. (Wally was still seen on the tennis courts and ski slopes shortly before he passed away in 1998. He was over 80.)

Joy Daubenberger was president from 1961 to 1962 while Bob Bossolt was Vice President. In the late 60’s summer activities started. There were shore parties in Dover Township in private homes. Then in the winter of ’64 the GSSC had its own ski patrol, such as Jimmy Carter, Bob Boswell of Boonten and Rick Single.

In 1966 the constitution was rewritten and by-laws were drawn up. The Roberts Rule of orders was incorporated. In ’68 they had water ski races for the ski council which was hosted by GSSC at Greenwood Lake and down the shore. Then ski clubs would take turns in hosting this each summer.

In ’68 GSSC got their 1st lodge in the mountains with committee person Bob Welgos. The following summer season enhanced social development. Softball games and picnics were started, but not as organized and planned as we have today. Golf outings started down the shore.

In the early 70’s meetings were held at King Arthur’s in Hackensack. Then they moved to the Washington Inn, Washington Township as membership increased to a huge 130. B.B.Q’s were held in backyards of members like Denise Salmon’s house, Sam Raymond’s and Ruth Danardo’s. People then would bring various dishes. The fee then was only $3 for beer, wine and soda.

In the 70’s summer parties at the shore house started in full swing at 301 Woodland Avenue, Avon by the Sea. This drew a huge crowd for the pig roast, clam bake, and turkey roast. Members dressed up for the occasion and trimmed the “Christmas in July” tree with a parade to follow. These kind of parties went down in history and are still written about today. Remember anyone?

In 1976 to 1978 the club rented a house for the season in Bromley on Magic Mountain, Londondary,Vermont. While membership was about 100, almost half the club stayed there. Interest was so strong that the club rented 2 houses during Stan Sharaga’s term and still profited. Weekend bus trips were more prevalent then. Thereafter daily bus trips started to travel to various ski slopes throughout the Northeast.

In the early years our Club created a jacket patch as did most of the ski areas. GSSC identified with a “Little Stinkers” picture of a skunk on a ski. Have those “Lil Stinkers” grown up yet? To invite people to join our club they had fund raisers, cocktail parties, ski fashion shows and advertised at the ski jamboree.

Skiing then was only done by a few. It was not nearly as advertised as it is today, and it was dominated by men. Women have since entered the ski sport in great force.

Back in ’68 our first lodge was rented halfway between Sugarbush and Killington, Vermont. Today we own our present lodge acquired in ’84 in Pittsford, Vermont. Continuous improvements are made through the leadership of the house committee and energetic volunteers, who maintain the house during organized work weekends and sponsor special weekends to do major construction, e.g., adding an outside deck and expanding the bedroom space with the addition of a loft.

Many thanks to the current members who took their time to reminisce: Denise Salmon, Stan Sharaga and Bob Bossolt. 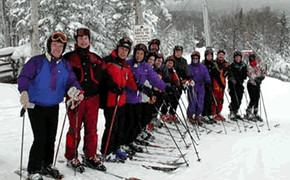 A Ski Club For All Seasons